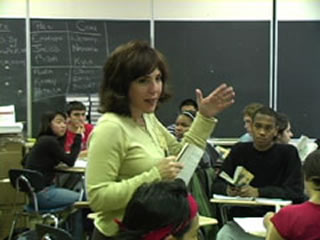 What: One-woman show on education written and performed by award-winning teacher
Where: Railyard Performance Center  1611 Paseo De Peralta, Santa Fe, NM 87501
When: Nov. 14, 2015, 7 p.m.
Contact:  Marsha Pincus  (610) 529 9269
Teachers, parents and other members of the Santa Fe community who care deeply about the current state of education are invited to attend Chalkdust, a staged reading of a new one-woman show  by award winning educator and writer Marsha Pincus.
The play was developed by story coach and director Tanya Taylor Rubinstein. The performance and follow up discussion will take place at The Railyard Performance Center on Saturday, November 14, 2015 at 7:00. Chalkdust is the first in a series of monologues to be written and performed by teachers as part of the Teaching Out Loud Project, created to bring the voices, knowledge and lived experiences of teachers back into the public dialogue about education.
Currently, every state in the nation, including New Mexico, is facing an unprecedented teacher shortage. Teacher turnover is at an all-time high. Teachers have never felt more demoralized and unappreciated.   Lack of adequate resources and the attacks on their job security by politicians have made teachers very uneasy.  The testing demands of No Child Left Behind and Common Core standards have made it impossible for them to use their professional knowledge to teach their students responsibly.  They have been shut out of conversations about policy that affect the lives of their students.
“Teaching is a very complex endeavor, only truly understood by those who do it,” said Pincus. “Teaching Out Loud invites teachers to make sense of their experiences through story and reclaim teaching and learning from those who have sought to control and profit from it.”
Pincus said that through sharing their stories with one another and the public, teachers “can make visible the deep psychological and societal issues they confront every day and the impact of current policies on the lives of their students.    And they can bring the human values of respect, curiosity, empathy, creativity and love back into the conversation.”
Chalkdust follows  Pincus  as a young white teacher forced-transferred to a high school in the heart of the African American community during the tumultuous 1980’s and 1990’s. It was an era when teen pregnancy was at an all-time high and crack cocaine had invaded the city’s working class neighborhoods.
Still, she finds that her students come to school each day, resilient and filled with untapped potential. In Chalkdust, she  dramatizes how she encounters  her own unacknowledged racism, questions her assumptions about curriculum and teaching methods,, and begins to learn from her students. It is a story that will inform, provoke and inspire others.
Marsha Pincus taught English and Drama for 34 years in the Philadelphia public schools.  She was named Philadelphia Teacher of the Year in 1988 and 2005, the only teacher ever to be so honored twice.   She was a pioneer in using playwriting as a teaching tool, and four of her students had their original plays produced Off-Broadway.  She co-founded Crossroads at Simon Gratz, a nationally acclaimed program featured on Tom Brokaw’s NBC report on education in 1992.  Her essays about education have appeared in several books and journals.
Chalkdust is her first play.
Tanya Taylor Rubinstein is the Artistic Director of The Global School of Story. She has coached and directed over one thousand people in sharing their life stories on stage.
Admission is pay as you wish, and all proceeds will go towards creating other Teaching Out Loudperformances.

Teshuvah – [Re] turning to Ourselves