The notice came through in my Facebook notifications. “Dave Weisbord has tagged a photo of you.”  It didn’t take long for the “likes” to begin, followed by the comments.

You can travel the entire globe,  move to a city thousands of miles away, make friends with people of every age and from all over the world, but no one will ever understand you better, or how you view the world than the people you grew up with.

Blame it on the zeitgeist.   Our childhood friends determine for us what matters and what does not.  And they are how we measure the distance we have travelled from our shared humble beginnings.

The picture was taken in January, 1966 at Dave Weisbord’s Bar Mitzvah.
Dave was my neighbor in Pine Valley, a sub division of brand new split level houses sold to upwardly mobile veterans in the early 1960s.  It was their little piece of the American Dream and our neighborhood was filled with Jewish men and their wives and their children.
Dave was a little guy on that snowy January day when he became a man.  A few weeks ago though, he was sixty, a grown man posting pictures on Facebook so his new girlfriend from the Phillipines could get a look into his life.
So you would think that Dave’s new relationship would have nothing to do with me.

But his walk down memory lane kicked up a photograph that collided with a memory of my own and his decision to tag me in that photo brought an image of my long forgotten and somewhat reviled thirteen year old self back into my life. 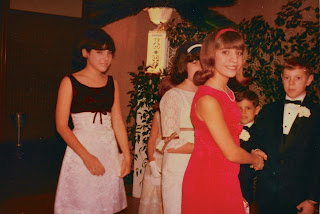 I hate when that happens, don’t you?
Thirteen was not a very good year for me.
From the short haircut, with the long bangs ( which I knew would soon be curled up and be ugly after a couple of sweaty dances) to the frosted pink lipstick ( the only color my mother permitted me to wear)  to the black eyeliner penciled inside my bottom lid, ( snuck into the synagogue ladies room and worn on the inside bottom lid, making my eyes look deeper and beadier) to the tightly fitted maroon velvet empire top on the pink satin dress, to my bare neck, legs and arms,  I was neither girl nor woman but some half and half being caught in the precise moment of transition.
My body with fresh new breasts bursting against the velvet and my waist drawing in the satin, close to my skin, stood awkwardly beneath my lowered head,  eyes peering up from below, looking straight into the camera with an innocent guile that suggested a sexual promise which would not be delivered for a few more years.

“You look so sophisticated,” my friend Tobi wrote beneath the picture. And “I remember that dress.”

I remembered it too. I had worn that dress a couple of months earlier, to my own Bat Mitzvah at Rhawnhurst Jewish Center on November 27, 1965.  My parents were separated then, not yet divorced and it was still a secret,  a shanda  that this had happened to our family. And I was very ashamed.
Before my Bat Mitzvah, I had begged my father to please sit next to Mommy at the service, or at least that’s what I remember asking, even if only silently from the depths of my thirteen year old heart.  Please, I prayed, let us look like a family.
I had already been devastated once in this whole Bat Mitzvah process when I learned for the very first time that I would not be permitted to read from the Torah. This, after sitting for weeks with the boys in trope class learning the melodies for each of the small symbols under each syllable.  The notes for the Torah trope were major; those for the Haftorah, minor
And I was such a good student. Better than any boy in that class, most of whom needed the cantor to sing their portions and press a press a record for them , which they would learn to imitate.  But I, who studied hard and learned it all who needed no recording, I was relegated to Friday night, deemed unfit to read from the Torah on Saturday.
Still.

That Friday night in November,  when I walked out onto the bema from Rabbi’s study’s door where I had been waiting with him in my maroon velvet and pink satin empire waist dress, I felt a sense of joyful anticipation.  I was ready for this.

I stepped up to the pulpit proudly, confident and ready to lead the congregation in  the first blessing of the evening service.  It was then that I looked down on the first row and saw my mother in her hot pink coat dress and her ostrich feathered hat sitting on the aisle and my father’s grey suit and crew cut three seats away on the other side of my sister and brother.
He didn’t look up to meet my gaze and I don’t remember looking his way again.  What the news of my not being permitted to read from the Torah had begun to do to me, my father’s self indulgent  intransigence finished off.
There were always many old men present in the synagogue in those days,  bearded men with thick Yiddish accents,  their words laced with strange vowel sounds from Poland, Latvia, Lithuania, Hungary.  And they would follow each word and trope when the Bat Mitzvah girl would recite her Haftorah, not hesitating to call out a correction for a wrong pronunciation or a missed note.
The quorum of old men sat silently as I chanted my piece. They stayed silenced as I  uttered my final “amen,” turned my back to the congregation and took my seat next to the Ark in a red velvet chair along the  synagogue’s western wall.

There are only a few pictures of me from my own Bat Mitzvah.  I don’t really blame my parents for not taking many. There was a lot going on in their lives at the time.  And I had forgotten about  that girl and her anger, her shame and her disappointment.  I hadn’t seen her for almost fifty years.

Not until an old friend from junior high school tossed a stone into the water of his memory and sent ripples into mine. 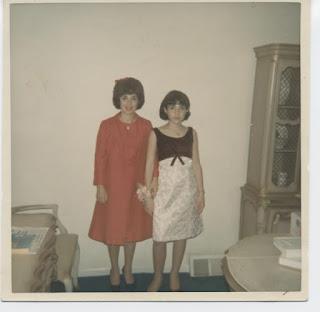 When Meaning Eludes Us

Once, when I was teaching college,I had a student from Wyoming in one of my…