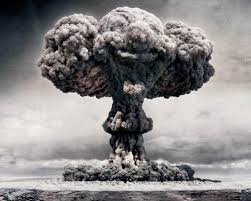 Let’s drop a bomb.
Why shouldn’t we drop a bomb?
Now is the time for it
While we are young
Let’s drop a bomb.
Suzy Cohen’s mother’s voice boomed out at us through her kitchen window as we played in her rocky back yard. Suzy, her brother Robert,  my friend Ellie and I were playing “statues” – a game which required you, once “frozen” by a rival team member, to remain absolutely still until someone from your team animated you with their touch. Gladys Cohen was a anomaly – a Democratic committee woman and small business owner who wore an old fur coat with sneakers over dungarees when she went to the grocery store. And she was fat in a boxy kind of way. Once when I was sleeping over her house, Suzy confided in me that her mother looked that way because years ago after giving birth to her and her brother, she got pregnant for a third time and the baby turned to stone in her stomach. Like a Shakespearean fool or a deranged Chicken Little, she’d bellow her warnings of the apocalypse in song then laugh sardonically at her own black humor.
She terrified me.
This was 1962, the summer of the 17 year locusts, the last summer of my life without structure or responsibilities. It was a time of surreal calm, sandwiched between the Bay of Pigs fiasco and the assassination of JFK when the children of would go outside and play from sun up to sun down, devising our own complex rules of engagement for every game we would create.  And as I listened to Gladys Cohen’s doleful revision of Nat King Cole, I felt a shiver run up my ten year old motionless spine as I waited for Ellie to tag me and release me from my paralysis.
With uncoiffed graying hair and a voice like Ethel Merman, Gladys Cohen was very different from the other women in this neighborhood.  First, she worked, side by side with her husband in a relatively successful sign painting business. None of the other mothers did that. Second, she spoke her mind in a booming voice. None of the other mothers did that either. Their role models, Marilyn Monroe if they were trashy, Jackie Kennedy if they were classy, spoke in tiny breathy voices that men had to move in close to hear.

My mother was more the Jackie than the Marilyn type except that in addition to being soft spoken arm candy for my father, she was an aspiring domestic goddess. Our newly built split level home was always immaculate and a full course dinner fit for a king was routinely served on green Melmac dishes at 6:00 sharp every night. My father was a furniture and appliance salesman and had decorated the entire house in the French Provincial style and stocked the kitchen with the latest time-saving electric gadgets so that it looked every bit as staged as the model house that my parents had fallen in love with two years before when they sold their post World War II brick row home and traded up for their piece of the American Dream.  My mother, always the over-achiever ( she had given up a scholarship to the University of Pennsylvania to marry my father – women, after all, weren’t supposed to be smarter than their husbands)  actually refused a dishwasher when my father offered her one because she thought allowing a machine to do the dishes would somehow be cheating. She was smart enough to permit him to buy her a huge stand alone freezer, making her the envy of her appliance hungry peers,  who poured through our back door into our basement with their  monthly meat orders wrapped and carefully labeled to be placed on their self-assigned shelves.
If the women (except for Gladys of course) seemed like cardboard cut-outs from Good Housekeeping magazine, or pale imitations of Donna Reed or June Cleaver, at least they were a constant presence in our young lives. The men, on the other hand were a complete mystery, shadowy figures who came and went at will, drifting in and out of our lives like the Lone Ranger.
I can still picture the three of them, an unlikely trio:  Bill Rosenzweig, the silver-tongued salesman who stood five feet six  and talked out of the side of his mouth, Freddie Gorman, the tall,  ruggedly handsome plumber with the mysterious eyes and Dave Braverman the young Philadelphia lawyer –who wore expensive suits and had a degree from . These three very different men were the proud owners of three successive split levels on , and fathers of nine of the children who vied for their attention as they stood in a tight circle near the end of our asphalt driveway on a hot summer night.

“Hey Bill,” I heard Dave, say pointing to our house. “I think they made your roof red so the Commies will know where to bomb first!”  The men laughed and laughed as if this were the funniest thing they had ever heard and I had nightmares for months.
Years later,  I would learn that what Freddie, Bill and Dave had in common was the fact that they were all cheating on their wives:  my father with a woman he met when my own mother’s Chevvy had hit the would-be mistress’ in the Thriftway parking lot.
Bill Rosenzweig abandoned his family for good on November 11, 1963, two weeks before Kennedy was killed and everyone’s lives, not just my family’s were turned upside-down.  It took a few more years for the truth about their husbands to be revealed to the Mrs. Gorman and Braverman. My mother later told me that my father had blind-sided her -making love to her the very night before he left  — as if everything was as it always had been.
No wonder she remained immobile, in bed,  for the next sixteen months.
In the days that followed my father’s departure,  as the news of his infidelity spread through the neighborhood, I watched in still silence as the women of Grace Lane, came marching one by one through our back door and into our basement to retrieve all of their steaks and chicken parts from my mother’s freezer. Perhaps they thought that being left was contagious. Or maybe they were afraid of my mother, now a beautiful single women, adrift among their ( soon to be revealed as ) philandering husbands. She, as well as her now fatherless children, became pariahs, shunned by the community that had once embraced us.
And during that sad,  fearful winter of 1962, only Gladys Cohen, wearing her peculiar costume and singing her portentous songs, strode up our driveway, knocked on our front door, and offered her support to my devastated mother.
Share This!

Assessing Assessment — Twenty Years Later — Will We Ever Trust Teachers?

Nearly two decades ago, in July, 1989, I was invited to give an address at…

I have recently returned from a very enlightening and magical trip to Italy. It is…