“You do know, Marsha, that camera means room in Italian.” ( I didn’t)

“Photoshop is a 21st century form of active imagination.” 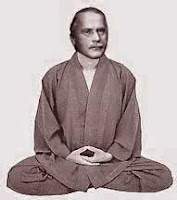 I found this idea on JungQuotes posted beneath a picture of Carl Jung’s face affixed atop the body of a yogi. And I sat back in my chair, in front of my computer and I said. “Yes.” “Yes” “Yes.”

It all began ( as so many of these things like this do) with a shadow. It was spring, 2010 and I was in Greece, standing in the entrance to the remains of the Temple of Apollo in Delphi, and before me were the words, “Know thyself.” I was pointing my camera at the Greek letters carved in stone when I felt it move downward. I clicked and when I looked at the image on the camera’s screen, there it was. The very first photograph of my shadow. 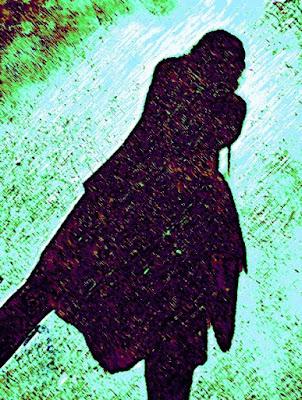 This trip to Greece was the first time I would be travelling abroad by myself, about to attend a writing and hiking retreat for women in Athens and on the island of Naxos. Because I was anxious about travelling alone, my husband joined me the week before the retreat and the two of us spent time together exploring Athens, Delphi and taking a cruise of the Greek Islands. And because he was going to leave and I would eventually be by myself, I bought something I hadn’t possessed since 1962 when I was given a Brownie Hawkeye for my tenth birthday – A camera of my own. 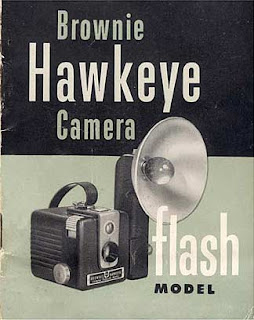 Throughout our married life, my husband was always the one to take the pictures on all of our trips and vacations ( along with making the travel plans, paying the bills and making the decisions etc.) So when I finally had my own camera, a simple-to-use point and shoot, Nikon Coolpix, I took the same kinds of pictures that my husband would – landscapes, buildings, historical sites, portraits of him posed in front of the landscapes, buildings and historical sites – until that moment when standing at the site of the oracle of Delphi, the camera pointed down.

On this same journey, I’d packed a book, bought at the last minute and stuffed into my suitcase as an afterthought. I had been attracted by the title, Traveling with Pomegranates: A Mother-Daughter Journey to the Sacred Places of Greece, Turkey and France and the little I had read about the book on its jacket. I knew that Sue Monk Kidd, author of The Secret Life of Bees had traveled to Europe with her daughter and they had co-written a book in alternating chapters about their experiences there. I was also attracted to the title; an allusion to the myth of Demeter and Persephone, a favorite of mine. 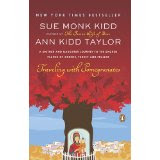 I began reading the book once I arrived in Athens, which is where Kidd and her daughter’s journey began. As I continued reading, I saw that I was following the same exact path of their journey—Athens to Delphi to Mykanos to Santorini to Kusadasi. And even more wondrously, I was encountering the same kinds of existential questions, spiritual crises and mystical experiences as Kidd, a woman struggling to redefine herself post mid-life. Kidd had come to Greece in the midst of spiritual upheaval, feeling a deep urge to write a novel yet not able to give up her past work as a non-fiction writer and suffering from self doubt about her ability to write fiction. Everywhere she went in Greece, she found images of bees and the Black Madonna, mysterious manifestations of her inner vision that would later appear in her novel.

She had come to the land where Western myth began and found connections to her own.

I, too, had come to Greece to write, and I, too, was a woman of a certain age, whose inner life was in turmoil.

Virginia Woolf meeting Carl Jung, at the entrance to my unconscious.

Which brings me to Jung and synchronicity. And the appearance of the darkness through the lens of a camera of my own. And my journey which was not unlike Persephone’s, travelling to the underworld of the unconscious, entering through the cave of my own shadow.

After Delphi, I began taking pictures of my shadow everywhere. On buildings and grass and ancient cobble stones. The shadow pictures gave way to other images in nature – anthropomorphic trees, angels in gardens, stones that spoke in secret tongues. 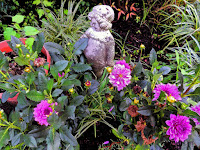 One day, last spring after uploading some of my images onto my computer, I began playing around with one of them on photoshop, when I accidently hit a filter that refracted the image in two, then reconstructed a new one by reflecting half of the old image back upon itself.

When the reconstructed tree appeared, I lost my breath.

The tree had been split open. Its hard trunk had cracked and a soft inner body, much like that of a woman appeared. Down the center of that body, images of gods, gnomes and other living creatures had become visible. 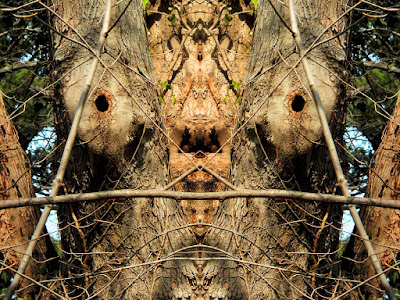 It was as if the tree were showing me its soul.

Its soul and our own. This deep deep place of inner and outer connection – this kind of revelatory oneness that animates us all.

And I, a woman nearing sixty, set free by a camera of her own, have entered that dark place through the shadow. I’m going to stay here for a while– imagining the real and playing, yes, playing with the possible. 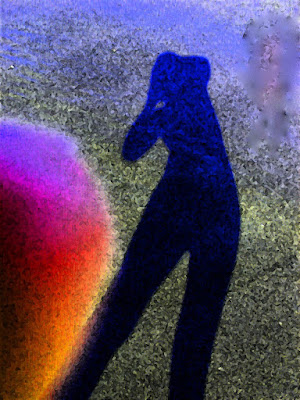 In writing group tonight, the prompt was to reflect on the questions you currently have…