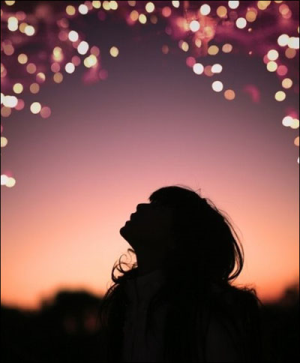 I’ve lost touch with the stars. Like titles that have broken away from their stories, their names are familiar, but I can no longer connect them to their place in the sky.

Which way is north? he would say to me in the backyard at night.

And I’d feel so smart sneaking a peak before triumphantly pointing in the direction of the North Star.

Funny now, thinking back, I wonder why I had to look. It never changed. This was ritual, occurring always at the same time of night, ( right before bedtime) the same time of year ( summer) and always from the same place ( the swing set in our backyard.)

I am as constant as the Northern Star, Joni Mitchell sings a few years later and I nod in cynical agreement as she responds to herself, Constantly in the darkness, where’s that at, if you want me I’ll be in the bar.”

I was in the dark about so much during those years after he left, when the stars were swallowed by the night and I stopped believing in providence.

From then on, my eyes stopped drifting heavenward.

Last summer at Ghost Ranch, on the New Mexican mesa during a meteor shower, the wild women of AROHO shed their shirts and danced like goddesses. 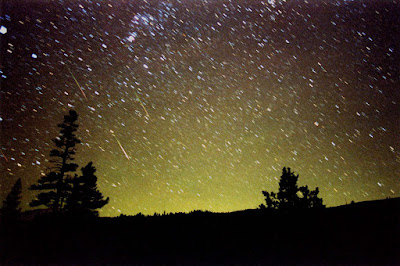 With their bodies swaying they leaned their heads back and stretched their necks like swans and kept their eyes peeled to the sky.

Here’s one on the right!

There’s another on the left.

And their eyes would snap west to east, east to west.

With the other women whirling around me, I stood perfectly still, bound to the earth, my eyes fixed only on the Big Dipper watching, waiting and hoping for that flash of light to tear through the darkness and illuminate the long forgotten Northern Sky.

Homo Narratus: On Stories and Freedom

In Composing a Life, Mary Catherine Bateson writes about the empowering nature of multiple narratives…

The summer the locusts came we made them our pets. The endless July days would…

Starting Anew and Living on the Hyphen.

When I first began this blog in September of 2008, I had recently retired from…