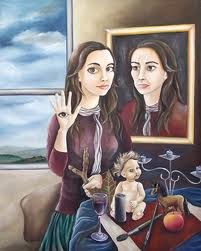 “This is not about you, Mother,” I say but of course I know it is. “Didn’t you see the title of this blog? I call it “her own terms” for a reason.”

I had been writing this blog for over two years and for all of this time, somehow, I’d been able to keep it from my mother. After all, at a healthy and active 81 years of age, she’d managed to live her life without computers or the Internet. This, despite the fact that my sister and I had bought her a computer when her husband died six years ago, with the promise that she could be in regular contact with her grandchildren via email.

That wasn’t enough of a motivation and she sold the computer along with much of the other contents of her home when she remarried and moved into the house of her new husband, a very hearty octogenarian, who is actively engaged in the world- including cyberspace — which he visits regularly.

So I’d been writing about my life, my family, my childhood, with little concern that my mother would ever see what I’d written. Her using the Internet seemed as unlikely as her suddenly swimming or riding a bike – two things that she’d never learned how to do during her Depression era childhood.

It was at the family Hannukah party where my seventeen year old niece announced, “Aunt Marsha, I have been reading your blog and I really like it. It’s very enlightening.”

I was totally shocked that Sunni, a pre-med major and freshman in college would have found anything of interest in my writing. But she told me she was most interested in the pieces about teaching and writing and that were she not studying to be a doctor, her next choice for a major would have been English.

I was gratified by this conversation, happy that my niece would find something of value in my blog, but it was my mother whose ears had perked up.

“How can I read this blog?” she asked and I got a queasy feeling inside. For the past few months, I had been writing pieces about making peace with my childhood and the impact of my parents’ painful divorce on the trajectory of my life. Most recently, I had written about the devastating effect my mother’s brief yet harmful addiction to prescription drugs, during the period immediately following my father’s abadonnment of his family for another woman had had on my life.

“Next time Irving’s at his computer, ask him to type in www.original.marshapincus.com and you’ll get to it,” I said.

“Why did you do that?” my husband asked later. “You know what’s going to happen.” And sure enough, two days after the party, the phone rang.

I knew exactly which line in which entry she was referring to.

“It wasn’t you,” I said. “Did you read the whole thing? The villain in that piece was the doctor who presribed the valium to you as if it were candy.”

“How can you say I didn’t love you? I was doing all that I could to keep a roof over your head and food in your mouth.”

“I know that,” I replied. “But it doesn’t change the way I experienced what was happening as a loss of love. I was eleven years old.”

“You know, a psychiatrist at the time told me that you would always blame me for your loss of a father. That you would always see it as my fault,” she said, softening a bit and becoming more reflective than defensive. “You’re fifty eight years old, when are you going to get over it?”

“It’s always been less significant to you than it is to me. For you it was a lifetime ago. He was your first husband. You’ve had others – good marriages and you’ve had a good life. But he was my father. My only one.”

There was silence on the line for a bit and then I heard my mother say, “I read the other one too. The one you called Chasing a Dead Man’s Story.”

In that piece I had written about how I’d finally been able to see my father’s refusal to tell me why he’d left as a gift that fueled my mightly need to know, my insatiable desire to get to the bottom of things and how that had helped me in my professional and personal lives.

“Sometime before the divorce, when Arline had broken up with him, before she took him back and they got married.”

“He said it wasn’t me. It was him. That he just couldn’t live as an imposter any more. That he was tired of trying to live up to the expectations I had of him. That he was never the man I thought he was.”

“He said THAT?? Did you understand what he was telling you? Did you believe him?”

“Well now I realize that I could have gotten over the betrayal a whole lot faster… I could have moved on with my life. It was the poverty that destroyed me. The worry about money and survival. How I was going to take care of you three kids on my own.”

“He bragged to me about how when he went to court for the child support hearing, he wore old clothes and didn’t shave so he’d look like a bum and the judge would believe he didn’t have any money. And after it was over, when he’d won and had the support reduced, he laughed in my face and told me how he got his boss to pay him under the table.”

There was silence on the line again, as I let her words sink in.

“That’s just another thing I will never know. How could he do this to his own children?? Trick the judge. And brag about it!!!”

I couldn’t get the image of my father , wearing baggy pants, and a torn flannel shirt with two days’ growth and a self satisfied smirk on his face, out of my mind.

“What kind of man does this? God, I’m fifty eight and this still hurts.”

“I’m sorry,” she said and in that moment, something happened between mother and daughther that had never happened before.

The conversation sparked by my mother’s foray into cyberspace and the story of my life on my terms lead us both to a place where we were tentatively if only momentarily on the same page.

Before I posted this, I asked my daughter Ali to read it. I wanted her to know the story but more importantly, I wanted to ask her if it seemed fair. This blog works both ways, I know. Mothers and daughters from different generations, reading each others’ lives without shame – with love and understanding. 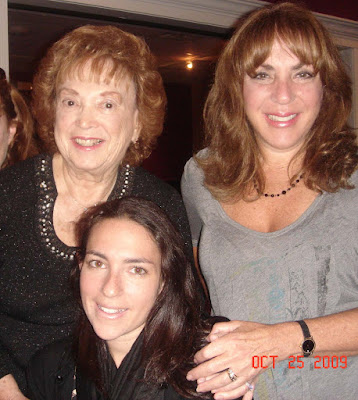 Assessing Assessment — Twenty Years Later — Will We Ever Trust Teachers?

Nearly two decades ago, in July, 1989, I was invited to give an address at…

In a wonderful talk posted on Ted.com, the Nigerian novelist Chimamanda Ngozi Adichie discusses the…