The summer before I entered 7th grade I wrote a book. I wrote it in one of those ubiquitous marble copy books that all American adults of a certain age will forever associate with school. But instead of writing my name, grade and subject on the appropriate box on the front cover in the spaces provided, I wrote “The Blind Love of Kirk and Ellen: A Love Story of Courage and Hope” by Marsha Rosenzweig.
If you opened the first page you would have seen a Table of Contents, the chapter titles written in ink in several different styles of handwriting. At twelve, I was shaping my identity as much as I was crafting my script, experimenting with flourishes and loops on the empty lined paper just as I would play with the thickness of black eyeliner and shades of lipstick on my blank face. Through all of the shape-shifting, there was one part of my identity that was a constant. I was a writer. Even before I had learned to write my letters, my mother told me that I would take a pencil and scrawl inscrutable symbols on whatever paper I could find, then “read” her the “stories” I had written. “The Blind Love of Kirk and Ellen” was just one of many books I wrote during my childhood and early adolescence.
Kirk and Ellen were both seventeen years old when they fell in love. They had known each other all their lives, living across the street from one another in almost identical split level semi-suburban shingle roofed homes, not a whole lot different from the one I lived in. Ellen’s bedroom, where she would talk to Kirk for hours on the telephone, hiding under the covers so her mother wouldn’t hear, was painted the same lavender color as mine and her bed spread resembled the flowered comforter I had wanted my mother to buy for me instead of the white chenille cover that didn’t provide nearly enough privacy when I would call my girlfriend Jackie on the phone and read to her by flashlight the latest chapter of my burgeoning oeuvre.
I don’t remember whether it was my idea or Jackie’s to send my manuscript to Berkeley-Highland. All of the books we owned at that time were published by Berkeley Highland Books. With authors like Rosamond du Jardin and Betty Cavannah and titles like Trish, A Date for Diane, Showboat Summer and Class Ring, these books with their signature scotch paid symbol in the upper left hand corner offered their twelve year old readers glimpses into the romance-filled world of their popular boy-crazy older sisters. What I do remember is that with Jackie’s encouragement, I bought a large envelope and lots of stamps, looked up the publisher’s address inside my copy of “A Girl Like Me” and placed my entire marble copy book inside. Along with the marble manuscript, I wrote a letter that said something like the following:

Dear Publishers:
I have been reading Berkeley Highland books for many years and I think it is about time for you to publish books for teenage girls written by teenage girls. We are better able to write about what our lives are REALLY like…. Enclosed is my book….etc.etc.
Marsha Rosenzweig, a REAL teenage girl.

Never mind that this realistic teenage novel was a love story between young adults whose love is tested when the young woman Ellen is blinded after being hit by a car and the young man Kirk tracks down the man driving the car who just so happened to have been Ellen’s estranged father who is then brought to justice, serves jail time, escapes, tries to run down Kirk who ends up paralyzed. The book ends on their wedding day as a brave Ellen pledges to be Kirk’s legs, while a courageous Kirk promises to be Ellen’s eyes forever.

Seventh grade began several weeks after I sent my novel off to be considered for publication (the first and last time I ever sent an unsolicited manuscript to anyone) and I soon forgot about my authorial aspirations, instead caught up in the exigencies of the junior high school social scene. So it came as quite a surprise when several months later, a package arrived for me from Berkeley Highland Publishing Company. I opened it hopefully until I saw the tell-tale black and white markings of my copy book attached by a paper clip to my very first rejection letter. 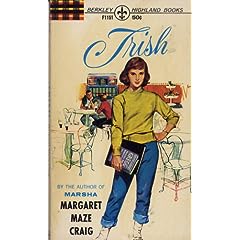 My Recent Journeys: Making Memories Through Time and Space

On April 9th, several Crossroads Alumni and I will be doing a presentation at Bryn…