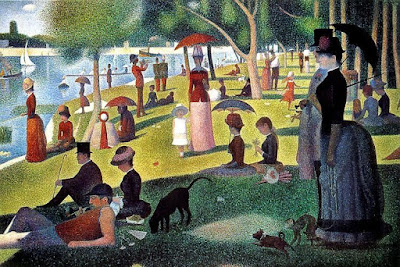 Finishing the Hat. This is the title of a new book by Stephen Sondheim, a collection of his lyrics replete with his personal reflections of the process of songwriting. ( The complete title of the book is “Finishing the Hat: Collected Lyrics (1954-1981) with Attendant Comments, Principles, Heresies, Grudges, Whines and Anecdotes.)

Finishing the Hat is also the title of a song from Sunday in the Park with George, a musical about the neo-impressionist painter Georges Seurat. The actor playing Seurat sings this song after completing his most famous painting, A Sunday Afternoon on the Island of La Grande Jatte. The stage becomes graced with live actors perfectly still behind a translucent scrim, wearing the exact clothing and standing in the precise positions as the figures in the painting. The actor re-enacts the moment when the artist is “finishing the hat” putting the final details onto the masterpiece, in the last orgasmic thrust of creative energy propelling the artist to push forth the painting, like a baby bursting from a womb. The masterpiece is delivered to the world, alive and complete.

In the song, he laments losing the lover who wouldn’t wait for him through this process. He’d hoped she would have understood, suspected that she might not yet despite this, he knows that he is powerless. Once in the grip of this generative force, he has no choice but to succumb to the surging waves of labor that will not be denied its completion.

I’ve been feeling a bit of this lately — the heady, almost giddy elation of creation as I learn how to make mosaics and experiment with photography. I become enrapt in the artistic process and I dream of the feel of cool pieces of broken glass on my fingertips, and I see familiar images in new and surprising ways.

Somewhere there is a place that exists between the conscious and unconscious mind – a wild borderland on the margin of sanity where images rise up from some deep ancient place and merge with shapes and patterns; where words heavy with the symbols they carry intersect with rational thought.

This is a captivating place to live, where there is no map other than the one you make with your own traversing of the territory, a place you must go to with abandon.

Stephen Sondheim was my friend Adele Magner’s favorite lyricist and composer. Sometimes we’d talk to each other in Sondheim lyrics. “Send in the clowns,” she’d say and I’d answer with a Jewish accent in the form of a question, “There’s got to be clowns?”

Or she’d sing, “Careful the things you say,” and I’d sing back, “Children will listen.”

And I will never forget her favorite line from her favorite Sondheim play, A Funny Thing Happened on the Way to the Forum – from the ironically titled “Impossible” – “The situation’s fraught, fraughter than I thought, with horrible, impossible possibilities.” 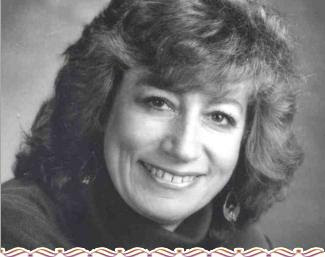 Adele created a program that enabled young people to feel the power of their own impossible possibilities — to imagine the real and play with the possibilities of their lives, by introducing them to the process of play writing. These adolescents, my students and thousands of others, were invited to give voice to their inner visions and outer conflicts and through the process of creating their plays, their very lives were transformed.

She was my teacher, my mentor and my friend and she taught me how to listen closely to what my students weren’t saying, to follow their steps in this complex dance, then lead them gently back to themselves.

Adele had cervical cancer and she suffered with it for three years before it took her. The horrible impossible possibility that lies deep in the dark and terrifying woods reared its head and swallowed her whole.

It was she who told me I could invent what I desire. It’s taken me ten long years since her death to finally get it — not just intellectually or as an academic concept but to fully GET IT. It isn’t just about cutting and reassembling glass, nor capturing surprising images in the shutter of a camera or juxtaposing words in unexpected ways. It’s about giving yourself over completely to the process of invention and committing to it fully.

And it’s about loving not the finished product but reveling in the pure joy of finishing the hat.

I am taking a mosaics class. I don't know if I consciously chose this class…