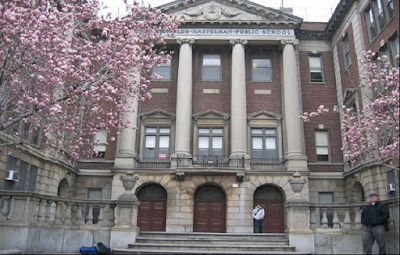 Ever since I heard that President Obama had decided to make his “Back to School” speech to the nation from the auditorium of J.R. Masterman Laboratory and Demonstration School in Philadelphia, the place where I spent the final ten years of my thirty four year teaching career before retiring in 2008, my head has been spinning with questions.

Why Masterman? Who chose this school for him? Masterman, a magnet school for academically talented and mentally gifted students from every neighborhood in Philadelphia ( though in truth, more prosperous neighborhoods, filled with well educated families are home to a disproportionate number of its students) is not a typical Philadelphia school. It is a unique environment that serves pre-selected, high performing students from grades 5 to 12. So when I first learned of this upcoming event, I did wonder whether the president had been informed by his advisers about the special relationship Masterman has with the city of Philadelphia. After all, two recent mayors, other public figures, and many school district administrators have sent their children to this top school. Mayor Nutter’s daughter is currently in the 10th grade there.

My questions turned to shock, then ire this morning when I read the account in the Philadelphia Inquirer in which (the controversial-to-teachers but highly praised by the media) Superintendent of Schools, Arlene Ackerman took credit for Obama’s choice of Philadelphia as the site for his national address. She asserted that he had selected Philadelphia for its highly publicized and (overstated?) increase in PSSA test scores and (in a sleight of hand naming gambit that would make George Orwell cringe) her Renaissance Schools Plan. This plan displaced experienced teachers at thirteen district schools, replacing them with different teachers from within the district, along with new recruits, including Teach for America rookies ( straight from their six week long summer “training institute” that served as their teacher preparation program) and spending massive amounts of money on “scientifically proven” scripted curricula that alienate teachers and students alike and line the pockets of text book conglomerates who shamelessly peddle these materials as the “answer” for all that ails underfunded schools in economically struggling communities — all decisions made without the professional input of teachers.

I have quite a bit to say about this hypocrisy and travesty and my friends who are still teaching in the district are urging me to speak out, now that I am far enough removed from the vindictive arms of administrative retaliation which they fear were they to do so. On Tuesday, you can trust that I will be watching this speech as it is streamed live on the White House web site. ( I have given up any hopes of being invited to my former school to see him live.) And I will be listening closely to what he has to say about the issues that students, parents and teachers hold close to our hearts.

Last year Obama was criticized for making a back to school address directly to students. Many parents put pressure on schools not to air his speech, fearing that his words would be partisan and political and that having them broadcast in school, would be coercive. This is an interesting point and one that speaks more to the kinds of discourse happening (or not) in schools today and by extension, in our society,than it does to the actual content of the president’s address.

No one seems to know how to create spaces for open, ethical and generative dialogue about the serious issues that are facing us today. The media no longer even tries, giving air-time to entertainers who fashion themselves as serious journalists, and sensationalizing the antics of fringe lunatics for the sake of ratings. The parents who objected to their children’s hearing the president’s address assumed that the students would be forced to listen to that speech without any critical discussion afterwards. And perhaps this is true in many schools today.

For herein lies my strongest criticism of Ackerman’s pedagogical programs – they do not allow for critical engagement of the hearts and minds of young people. Programs and teaching methods geared towards finding “right answers” for decontextualized test items do not promote critical thinking nor leave room for exploration of nuance, paradox, contradiction, multiplicity, shifting perspectives and complexity –skills that are needed in the fast paced, interconnected global world in which they live.

One needs only to look at the current circus surrounding the “minister” in Florida and his threat to burn copies of the Qu’ran or the knee jerk reaction to the building of an Islamic center in Lower Manhattan to see how few people in this country are capable of the kind of nimble, complicated and ethical thinking necessary for a working democracy.

So yes, I am fired up about this. I will will be listening very closely to President Obama on Tuesday when he addresses the nation from a place where I spent ten years as a teacher and taught hundreds of the “best and brightest” students in Philadelphia. I will also be thinking about the thousands of students I taught at Simon Gratz High School for twenty years, a comprehensive neighborhood high school that did not have the luxury of pre-selecting students who already had high test scores, that lost many of its resources during he 1980s to the establishment of magnet schools, that continues to lose resources in the 2000s to the proliferation of public charter schools. And I will be hoping ( yes Mr. Obama, I have not yet given up hope) that I hear our president say that what’s broken about the system is neither the teachers who can’t teach nor the students who refuse to learn, nor the parents who don’t care. Those statements, while they carry some truth in a few circumstances, serve as canards and ways of keeping the public from looking at the structural inequities in the system itself which is not designed to make available to ALL students in Philadelphia or anywhere in this nation the kind of respectful, rigorous, and critically engaging education to which the students who are lucky enough to attend Masterman have access.

Masterman shares its reasons for success with other excellent schools. Caring, hard working teachers. Involved parents. Students who are fired up to learn. But there are two inextricably connected characteristics that make Masterman unique which cannot be dismissed in any analysis of the current system: 1) the students enter the school having already mastered the skills to d well on standardized tests and 2)
the teachers at Masterman are treated as professionals respected enough to modify and design their own curricula to engage and inspire their students.

Masterman “works” because it is not forced to follow the same restrictive and repressive rules as the other schools which cannot select their students nor teach in ways that will challenge and engage them.

I will be listening on Tuesday, hoping that I hear in the president’s words some understanding of this reality and the implications his support (tacit or otherwise) of Ackerman’s policies has for all of our young people as well as the future health of our democracy.

Let me know what you’re thinking about this.. and stay tuned.

One of the Many Reasons I Support Obama