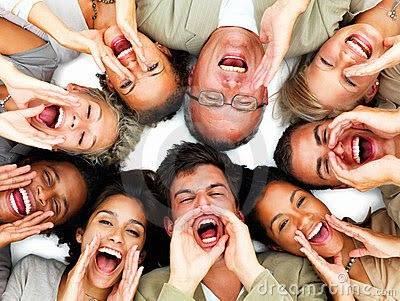 “I just want to be heard!” my students would yell, when the discussions in class got hot and contentious. Their voices would get louder, the tension in the room would mount.

“And what about me?”

Often, these discussions were about race and/or gender, sometimes in response to the literature we were reading, like Beloved or The Adventures of Huckleberry Finn. Others were sparked by current events — those moments that erupt in our culture from time to time – exposing the raw underbelly of our divisiveness – the O.J. Simpson trial, the Clarence Thomas hearings, or the Mike Tyson’s rape conviction, the Rodney King verdict.

One time, in the midst of one of these cacophonies, in desperation I did an experiment.

“Okay,” I said. “I get it. You all want to be heard. Here’s what I want you to do. I want you to think what you need to say. What words you need to have heard. Then close your eyes and wait for the next instruction.”

I waited a few moments, letting the energy that had been set loose in the room settle back inside of the students. It took some longer to become still, to stop looking at others. But soon all of them had settled into themselves and appeared to have gathered their thoughts.

“When I say, ‘okay, now,’ I want you all to keep your eyes closed then yell at the top of your lungs all of the things that you want to say about this issue. All of those things you NEED other people to hear.”

What followed was a thunderstorm of sounds, a torrent of emotion, words rising and falling, bumping into each other, banging off walls, exploding in mid air.

After it reached its crescendo, an eerie calm filled the room.

We all sat in stunned and profound silence – spent and a little bit ashamed.

It was hard, but I resisted the didactic urge to explain what had just happened and how it connected to what I was hoping they’d learn about creating the spaces for real dialogue across our differences.

But I didn’t have to explain anything. They got it.

In the quiet moments that followed, we had a very different kind of discussion than the one we were having before. When the time felt right, I asked, “What just happened here?”

And this time, when they answered, their words were softer, more measured. They were careful to make sure no one else was speaking before beginning to speak. They apologized when their words collided, when two people started to speak at the same time.
And they remained on the edge of their seats, listening intently to what each person had to say.

The traditional English curriculum is divided into 4 parts: reading, writing, speaking and listening. I am not going to go into whether I think we do a good job with the first three. All I will say here is that at least we are trying to teach them.

In the years that followed, I learned and created new ways of structuring my classroom to encourage different ways for students to learn how to listen to each other, raise questions together and explore answers collaboratively.

This meant taking a very different stance taken towards classroom discourse than the two which dominate the American classroom: recitation and debate. In recitation, the teacher asks the question and the students answer. The teacher says whether the answer is right or wrong.

Debate is more complicated and while it seems to empower the students to express their voices on a particular issue, it does not teach them to listen to the points of view of others -except to try to discern weaknesses in their arguments for the purpose of counter-attack. And while I can see the benefits of debate, e.g. the research involved in preparation, the public speaking skills that get honed, the engagement with important issues, what I find most objectionable is that the goal of debate is to vanquish one’s opponent and to win.

Truth, real meaning, multiple perspectives, new ideas and points of view all get lost in the fray.

Recently, I wrote two blog entries about a controversial topic – President Obama’s choice to deliver his back to school address to the nation from Masterman, a high performing magnet school in Philadelphia where I spent the final ten years of my teaching career.

In Part I of the blog, I was very passionate about the hypocrisy of School Superintendent Arlene Ackerman in taking credit for Obama’s choice to come to Philadelphia because of her reform policies – the irony being that Masterman is successful because it is exempt from the District’s oppressive curricula. That blog, picked up by the Philadelphia Public Schools Notebook and quoted in a Philadelphia Daily News column touched a nerve and incited dozens of responses, including personal attacks, defenses, and revealing many of the fissures and fault lines present in our city and schools. Very little thoughtful dialogue occurred, and I felt that many of the people posting comments missed the major point I was trying to make about equity in educational curricula and programming.

Subsequent to the President’s speech, I wrote a follow up blog, in which I laid out my arguments for being upset with Ackerman, researched former speeches Obama had made about education that I thought were more on point, shared my philosophy of teaching and learning and urged for a multiplicity of voices, complexity, and nuance in a sustained dialogue about public education.

The blogosphere has made it possible for everyone with access to the Internet to have their voices heard.

But who’s listening?? And how are we hearing each other’s words?

I must be a terrorist -- or at least have terrorist leanings. See, I have…