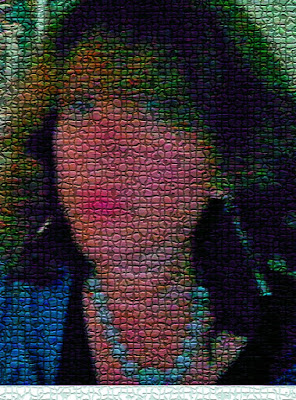 I am taking a mosaics class. I don’t know if I consciously chose this class because I am in the process of falling apart, or, if as unconsciouses are want to do, mine selected it for me from a random list of classes at Main Line Art Center.

When I was a girl, I made things – pretty objects out of clay or yarn or fabric. I molded beads and pots, knitted sweaters and knotted macrame necklaces, I batiked pillows, and wove blankets and wall-hangings.

Then, one day, I stopped. No longer using my hands, I ceased living in my body and began spending all of my time in my head.

Pure mind is how I saw myself. Cool, crystal clear thought and theory. I could think my way out of my body, not feeling or sensing the concrete world around me.

Jung says that in the process of building our persona in the first half of our lives, the version of ourselves we create to interact with the outside world, if we ignore particular aspects of our psyche, say our sensory perception or our emotions, we do so at great peril. The shadow craves the light, he says, and that which we keep in the darkness of our unconscious will one day come to us as fate.

When I entered the mosaics class that first morning, I was still feeling a bit shaky. This fall marked the first semsester in thirty-six years that I wasn’t teaching and it was the first time I had been in an art studio. There were three long tables lined up in a U and women were unpacking large canvas bags and laying their tools, materials and works in progress out in front of them.

One woman invited me to sit beside her and another took me out into the hallway to show me the large boxes of tiles, dishes, cups, bowls, vases, mirrors that were available for us to use.

The women continued to greet each other as they entered, catching up about their children, their families, their summers. I was the only newcomer to the class, but the others all made me feel welcome, eager to share the variety of projects they were working on and the interesting materials they were using like broken tiles, beads, fused glass, ceramics, bone china. Some worked small reassembling delicate pieces of shattered china; others worked large piecing together huge shards of colorful smashed pottery. Some were making useful objects like flower pots and bird houses; others were creating intricate pictures as detailed as a fine water color painting.

I was starting to relax, feeling like I’d made a good decision in selecting this course, but my anxiety returned when the teacher called roll and got all they way to the end without saying my name.

“Who are you?” she asked, looking at me with not unkind eyes.

“Marsha Pincus,” I replied just as she was saying, “Oh! You’re registered for the 1 o’clock class.”

I panicked. It was just like this newly broken down fragmented version of my self to screw up the schedule — I had been doing this a lot lately — missing appointments, mixing up times — my not so unconscious rebellion against decades of rostered structure: 8:09 to 8:54, first period; 10:13 to 11:01, lunch; 3:03,dismissal.

I was about to start walking towards the door when I heard her musical voice say, “They must have made a mistake in the office. I’ll tell them you’re in this class. I see you already feel at home with this group. Stay.”

The process of individuation which one can experience in mid or post mid-life involves the total breakdown of the persona. It cracks and crumbles, no longer able to contain all that is going on in the psyche. And presumably, or so I have read, after the breakdown and fragmentation, one becomes whole.

I wonder how this happens. Will there be a soft whoosh one day followed by a ka-chung when all of the pieces fall into place? Or will it be more gradual and painful, like the knitting together of broken bones?

The teacher, Carol, has us go around the room and introduce ourselves, each woman saying what brings her here, what she is working on in her mosaics and where she is in her life. When it is my turn, I say my name and start to tell my story — the one I have been telling lately about my life — how I taught writing for 36 years, how I spent most of my adult life supporting and inspiring others, how this class is going to be a turning point for me, an new begining, but before I could finish, the friendly woman who’d offered me a seat beside her exclaimed, “You’re that famous English teacher who taught all of those kids to write plays!!!”

“I used to be,” I managed to say starting to shake.

Later, she told me her name is Judy and that she taught for 39 years at Community College and that she knew my friend Adele Magner– the founder and director of Phildelphia Young Playwrights. Before her death on January 6, 2000, Adele had been my closest friend, mentor and advisor. Ten years older than I, she was my guide and I could always count on her to show me the way through whatever was coming next in my life.

I reached over to touch Judy’s arm after sharing our stories and memories of Adele. A warm current pulsed through me as I felt Adele’s loving presence beyond the grave.

In the Jewish tradition, a groom breaks a glass beneath his foot, right before the couple’s marriage is officially declared. There are lots of interpretations for this ritual, but the one I like the best goes like this – the breaking of a glass marks an end to what was and points simultaneously to a new beginning. After the breaking of the glass, the crowd erupts in joyous cheers. “L’Chaim!” To Life!”

After the class was settled in, after all of the announcements and introductions were completed, I went into the hall and gathered dishes from the bins of offerings on the shelves. I stacked them neatly at my spot on the work table.

And Carol, with the kind eyes and musical voice, came up beside me, put a dish in one of my hands, and a pair of tile nippers in the other, then holding me steady she said,
“Okay Marsha! Let’s break some glass!!!!” 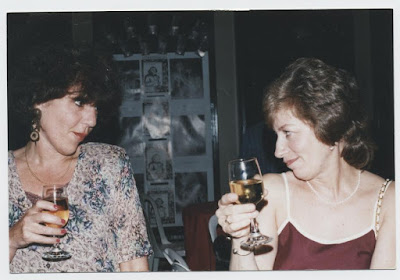 Finishing the Hat: Following the Urge to Create

There's a part of you always standing by,Mapping out the sky,Finishing a hat...Starting on a…

In writing group tonight, the prompt was to reflect on the questions you currently have…