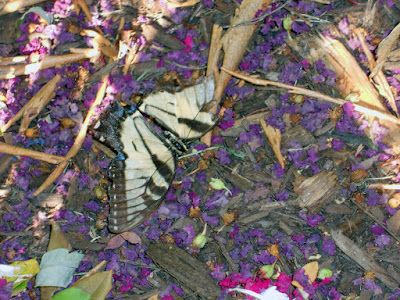 The day that my friend Tobi Zion delivered the painting of me that I had commissioned her to do, I found a dead butterfly floating on the top of my pool. The painting, entitled “Marsha, Reborn” grew out of conversations I had been having with Tobi about this passage of life I have been going through since my children left home –a kind of struggle for re-invention post- career, post motherhood – which as I explained to her felt like a kind of re-birthing of the self.

As we were talking about this a couple of weeks ago, Tobi opened her eyes wide and said, “I SEE it!!!” And at that moment, we agreed that she would paint what she had seen.

It only took her about two weeks to complete the painting, and during the process, she would sometimes email me and tell me what she talked about with me that day, or what music we were listening to together while she was painting me. One the day, right before she finished the painting, she wrote, “I can feel you breathe.”

So it was with more than a little bit of anticipation and anxiety that I awaited her arrival.

When I first saw the painting I was stunned and slightly disappointed. While the woman in the painting looked like me, her expression and the overall sense of the scene seemed too calm, innocent, almost and not much like the wrenching emotional pangs of a difficult labor I’d been experiencing lately. That feeling lasted only a moment, as I sat before the painting and let it tell its own story to me. Even though I had had the idea for the painting, by sharing it with a close friend, an artist, and asking her to paint it, I was saying to her, “Take this story, and make it your own. Show me new dimensions and resonances that I am incapable of seeing on my own.”

And that is what she did. She dressed me in my favorite summer dress, put my jewelry on me, turned my lips into a Mona Lisa smile showing my mouth at the moment right before speaking, the words promising to escape from my mind and planted inside of me a fully developed fetus, swimming in a womb of flowers, its round face, covered by a butterfly. A joyous and colorful celebration of the fullness of life.

Later, she told me that she had unconsciously painted the same butterfly that I had placed on my facebook page – the one in a see-through chrysalis about to emerge into the world. 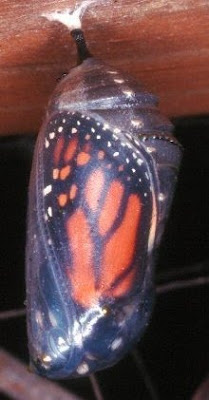 Tobi and I had a wonderful afternoon together that day, going out to lunch and talking about deep and important things. She’d recently lost a friend to cancer, as I had a decade ago, and we talked about the fragility of life. We talked about our grown children, our marriages and our longing to love and be loved.

When I returned home, late that afternoon, I went out my back yard for a swim. But first I had to skim the pool, a mindful ritual for me which I remind myself that everything – my house, my pool, my body exists in nature.

Floating atop the pool and nestled within hundreds of bright pink petals from the crepe myrtle tree was a beautiful yellow and black butterfly. I gently placed the skimmer beneath it, then carried it in the net over to the crepe myrtle tree where I let it float to the ground. With mounds of deep pink flower petals, I covered the butterfly until it could no longer be seen.

For days I have been pondering the significance of the appearance of a dead butterfly, floating in water in my back yard on the same day that my friend brought me the image of rebirth.

When I told my husband Nate about the butterfly, ever the rational man, he said, “It’s just a coincidence. It doesn’t mean anything.” He went on to explain how if we were to calculate the number of butterflies we had seen in the garden this summer ( a much higher number than usual) and then figure out the surface area of the pool and the space it took up in the backyard, then extrapolate using some formula of probability, we would see that it was kind of inevitable that at least one of those butterflies would land wings down in the pool.

But I couldn’t get the butterfly out of my mind. On the following morning, I went out to the crepe myrtle tree to visit the makeshift grave. What I saw startled me. The butterfly I had buried beneath the tree was lying lifeless about a foot away from the pile of petals.

I can only imagine that last surge of life that fueled its final movements – it’s dance before death. And looking at it then, I saw its wings move ever so slightly, not sure if it did it itself, or if it were blown by the passing of a gentle breeze.

In Beyond Coincidence, Plummer and King compare our understanding of synchronistic events to quantum physics. They write about Carl Jung and the work he did when he teamed up with the physicist Wolfgang Pauli. One of their most fascinating insights — that just as physicists are constrained in their ability to know whether the sub atomic particle they are observing is a particle or a wave by their own participating in the observation, so too are we constrained when looking at a the occurrence of two or more causally unrelated events which could have the same meaning by our willingness to believe in a world in which mind and matter are united.

My husband, who makes meaning in his life through logic, numbers and formulas, was able to explain the appearance of the dead butterfly through mathematics and probability. For me however, as someone who tries to live in story and metaphor, in poetry and possibility, the appearance of the dead butterfly on the same day as the arrival of the painting of rebirth calls up deeper meanings and teaches me some difficult lessons.

I must always remember that what is born will always die, that with every new beginning there is an end, that every transformation requires a sacrifice and that life itself, like the butterfly can be fragile and short-lived. 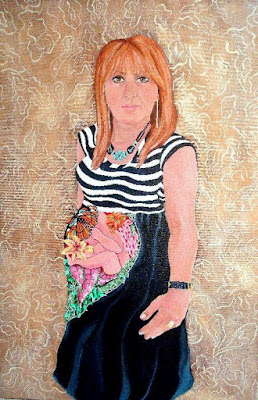 FOR IMMEDIATE RELEASE What: One-woman show on education written and performed by award-winning teacher Where:…

On tracks and things in high school

When I was a teen-ager, school was my salvation. It provided a structure and predictability…

Searching for a New Vocabulary

Searching for a New VocabularyI joined a writers’ group last night. Run by a local…