It’s funny sometimes how a certain image or idea seems to come out of nowhere and take hold in popular imagination. I wrote the following introduction to a short story last week at my weekly writers’ group. In the car on the way to the class, I felt an itch on my back. The serendipitous writing prompt that group leader Alison Hicks offered us: Begin with a sensation in the body. I wrote:

It started as a slight itch on her back under her left shoulder blade. She doesn’t exactly remember the first time she felt it, and it took weeks, maybe months before she allowed herself to believe that something was happening inside of her body- something life changing and out of her control. Rather it was when she felt the same relentless itch beneath her right shoulder blade that she thought back and knew – yes, I have felt this before, on the other side.

How strange to be going through this new set of changes now ( the itches weren’t to remain only itches for long) so soon after she had just grown accustomed to the soft hair that appeared between her legs, that had shown up one day like a spot of dust, then grew like a shadow on a lengthening day to cover more of her soft skin. And she hadn’t quite learned how to sleep with the sore fullness of her recently sprouted breasts.

It was while she was lying on her back in her single bed on the worn chenille spread her mother had laid down on her bed after her grandmother died, trying to avoid putting pressure on breasts that she began to wiggle slowly back and forth, rubbing her back across the ribs of cotton which made up the textured pattern on the spread. She can’t tell nor possibly remember whether the rubbing made her aware of the itching or if the itch had instigated the rubbing.

Nonetheless, once she became aware of it, the itch, the itches, she could think of nothing else. She noticed how they seemed to get more intense, growing more deeply, like roots taking hold beneath her skin and burrowing into her muscles. At the same time she was feeling the itches morphing into the deep throbbing pain on the inside, the outside of her skin, in those certain spots beneath her shoulder blades felt as if they were being rubbed raw and ready to split open.

She told no one. She was afraid of doctors since her brave and vibrant grandmother had died in the hospital, all alone with machines hooked up to her heart and tubes running through her veins and she, lying there unable to move nor speak, only the terror escaping through the black holes her eyes had become. And she dare not tell her mother, who had become one of the walking dead, speaking in a monotone, going through the motions of making breakfast, packing her lunch, then returning to her bed with a robotic precision and a bland cold kiss on her daughter’s cheek.

No. She would tell no one.

One night, when she could not stand the pain a moment longer, she raised her left hand and reached behind herself to try to gently rub the place of fire on her back. Her fingers were surprised by something cool and soft and soft to the touch. With curiosity, she lifted her right hand and reached behind, touching the place of fire on the other side and felt the same thing. For a moment, she stood there hands behind her, elbows extended on either side.
She doesn’t remember how long it took her to lower her arms and go to the mirror, but she does remember that once she got there, it took a very long time for her to remove her pajama top. She gazed at the reflection of her breasts, only slightly startled by them this time. But as she slowly turned her body while keeping her face looking straight away into the mirror, she saw emerging from the two bloody slits on her back the tip of glistening grey and white feathers. 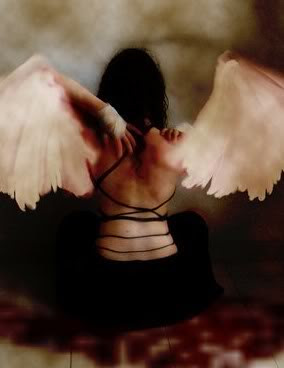 Last Sunday, when I was reading the New York Times Book Review, I was startled to see that the book being reviewed on the first page was entitled Angelology by Danielle Trussant. The reviewer described it as a complex thriller about fallen angels and compared Trussant to Umberto Eco.

Then this morning, I received an email advertising a French film festival here in Philadelphia and one of the feature films was about an oridinary couple who become the parents of a vert special boy named Ricky. (Click on the title to see the trailer.

It’s been almost twenty years since there were angels among us, in movies,in plays, on television, in our gardens, on our shoulders. But, there is some evidence that they are returning to the popular imagination – there are angels of all kinds in the zeitgesist – aloft and fallen. And the other night, I felt their presence. It began as an itch on my back.

Sometimes the words don't come. They get stuck deep inside the gap between the pieces…

Two Poems about Teaching: For my Teacher Friends as Another Year Closes

I Follow the steps in the complex dance.Listen closely to what they are not sayingThen…