When my dear friend, colleague and mentor Adele Magner passed away ten years ago, January 6th, I was asked to give one of the eulogies at her funeral. It was the most difficult thing I had ever had to do in my life. Knowing that Adele loved theater and had dedicated do much of her life supporting young people in finding their voices and writing their own plays, I turned to plays for inspiration. Rent, with its song, Seasons of Love offered me some solace as well as a framework for honoring Adele. I began the eulogy with the words:
Five hundred-twenty-five thousand six hundred minutes
Five hundred twenty-five thousand moments so dear
Five hundred thousand six hundred minutes
How do you measure, measure a year?

As we approach the 10th anniversary of her death, I am struck by the passage of time.
525,600 times 10 equals 5,250,600. Five million, two hundred twenty-five thousand six hundred minutes. That’s how long she’s been gone. Yet, her spirit is eternal, and I am still touched by her influence as has thousands and thousands of others.

For my blog today, I share the eulogy I delivered over five million minutes ago, honoring Adele and her seasons of love.

The characters in Jonathan Larson’s musical Rent measure their lives in daylights and sunsets and midnights and cups of coffee.But if you are at all involved with Adele and the Philadelphia Young Playwrights Festival, also known as PYPF, you’d know to measure a year in:

workshops and meetings, in laughter and stories,
in budgets, productions, in friendships and plays;
in teachers and playwrights and artists and children,
this is how Adele and Young Playwrights measure our days.

For when you become part of The Philadelphia Young Playwrights Festival you enter into a world delineated by this creative process. Even the seasons are marked by the cycle of PYPF events: There’s the Fall retreat, the Winter Workshops, The Spring Productions, The Summer Script Reading. One year leading naturally and predictably into the next, like a never-ending circle whose beginning emerges from its end.
The Philadelphia Young playwrights Festival was born from an idea, a commitment, a passion that Adele had – that every child from the inner city to the suburbs, from the honors students to the apparent underachievers – could write a play. During a sabbatical, she traveled to New York to meet with Gerald Chapman, he founder of the New York Young Playwrights Festival, and doggedly proceeded to do everything in her power to create a similar program here. While Adele admired Gerald Chapman and learned much from him, she didn’t imitate his program – she created her own – one which is brimming with her unique talents, values, and joie de vivre. Simply stated, Adele believed that every single person is important and that it is a crime not to laugh, eat and have a good time.
This was immediately evident when I met Adele in 1987 at the first Fall Teachers Retreat, the first of twelve I would go on to attend. Immediately, I knew that I was in the presence of something very special. First, the very idea of it was unique: an overnight retreat for teachers to learn about teaching playwriting to our students by learning to write our own plays. Second, the entire week-end had been carefully designed to foster our creativity and comfort. Steak and lobster was on the dinner menu Friday night and the accommodations were lovely. And third, the combination of people Adele had gathered together was extraordinary: teachers and administrators from Philadelphia and Cheltenham, professional playwrights and college professors, and most telling of all – her close friends and family members. I can still picture her son, Aron, then twelve years of age, acting in a play for us after dinner.
In August Wilson’s play, Joe Turner’s Come and Gone, Bynum Walker says that every person must find his song to be at peace with himself in life. Well I believe that Adele knew her song and it was a song of connection and possibility. She has been able to bring diverse and disparate individuals together in a spirit of cooperation, not competition. She has created the context for us to become a nurturing and creative community – teaching us through her example how to do the same for our students.
Adele’s energy derived from fusion. – Unlike fission which fragments and divides, whose by-product is toxic and destructive, the by product of fusion is water which promotes growth. And did Young Playwrights ever grow! From a dozen high school classrooms and 90 scripts in 1987 to hundreds of teachers, thousands of students in public, private, Catholic, Jewish, Quaker, city, suburban, elementary middle, and high schools in a dozen school districts in South eastern Pennsylvania and New Jersey. Last year nearly one thousand plays were submitted – each read and responded to by an ever growing literary committee made up of friends and supporters of PYPF.
And you’d have to be careful if you ever told Adele that you had an idea, lest she’d have you turning into a new program before you know what hit you. There was Stage Write, bringing together city and suburban students as partners in the playwriting process; New Visions, which brought playwriting into classes across the disciplines and Anti-Violence Program which uses playwriting as a tool to help young people stave off violence in their lives.
These are but a few of the endless possibilities which can emerge from the powerful combinations of people that Adele has bought together.
In explaining the mission of PYPF Adele has said, “We believe that every young person has something vitally important to say and we help students to shape their plays into works that have appeal for theater goers of all ages. PYPF students learn the power of the word and the magic that happens when others listen.” I have witnessed this magic in my own and others’ classrooms over the past twelve years. The young playwright doesn’t just get to be heard but enters into an active dialogue with the world – a dialogue which can bring about positive transformation. As Adele always reminded us, “By writing about their world, young people are seizing the power to change it.”
There is the saying, “When you are ready to learn, a teacher will appear.” Adele was that teacher for me who appeared in my life at the precise moment I was searching and ready. Now it is our turn to become the teachers for other seekers we have yet to meet.

Five hundred, twenty-five thousand, six hundred minutes
How do you measure the life of a woman or man
Measure your life in love.

Adele Magner’s spirit will live on in the seasons of love woven into the fabric of the Philadelphia Young Playwrights Festival. 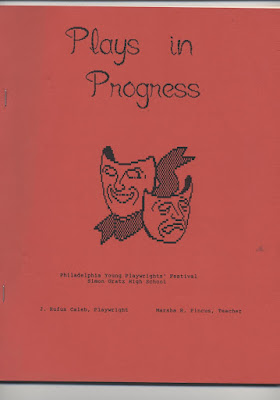 Tarot or Not Tarot?

I've recently enrolled in an on-line writing course entitled Wheel of Archetypal Selves, through the Story…

Student Voices in Dialogue With Teachers – Part I