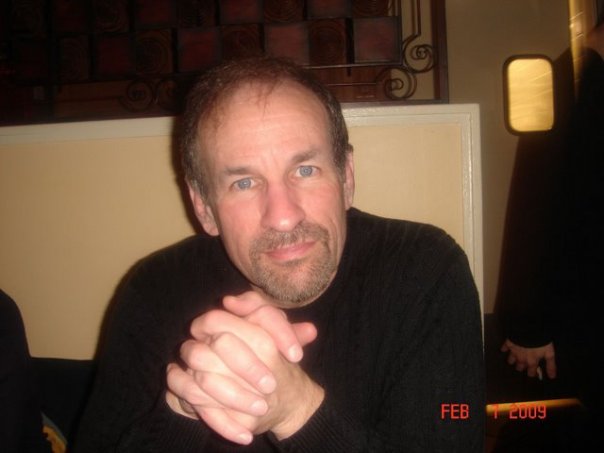 I can’t say which I see first – his eyes or his smile but they are connected. He has blue eyes that are so deep set that they look like two portals in a ships cabin looking out on the sea.

The fluidity of his eyes is in stark contrast to the solidity of the rest of his face- the straight nose and teeth, the square chin, the strong cheekbones. Unlike other men his age, whose faces have expanded with age, my husband Nate’s has thinned. All of the fat has been drained from beneath his skin and sometimes, when he’s not smiling, his face and neck can appear slack, his eye sockets darkening and he can look for an instant like the head atop a Halloween skeleton, prompting people to ask him if he’s lost a lot of weight lately.

He used to be fatter, it’s true and since his father died of a heart attack in 1997 and his younger brother had by pass surgery before he was 40, Nate’s changed his life style and those changes have become evident on his body and face.

He has these really strong legs and he’s quick, though not as quick as he once was. And he plays basketball – sometimes up to 4 times a week.

It’s been a while since I’ve seen him play. I remember when we were young, I would feel a thrill watching how he was transformed on the court. The sweat dripping from his thin brow to his full beard, his hair wild and his blue eyes gleaming with the intensity of total immersion in the moment – the play – the shot, springing up on his haunches, making the foul shot, slamming his smaller body into the larger ones surrounding him with abandon, then waiting, bouncing from foot to foot, alert, taking it all in.

It is his eyes, of course, that I come back to – the window to his soul – how they appeared to me then when I watched him. He had the most astounding peripheral vision; he could fake and feint — the ease of these moves belying the years and years of practice. He could look straight ahead, dribble the ball and without moving his gaze or his body, pass the ball to the man who was circling behind him to his left.

When I met him that night in Doc Watson’s pub 35 years ago, he must have been noticing me from the corner of his eye. He appeared next to me, after sidling up to the bar to order a “gingah ale.” I turned to him and said, “Say my name. I love how people from New York say my name. It’s Marsha.”

It was then that he turned his full gaze on me and I saw those eyes for the very first time –cool and clear as ice water but bestoying upon me a warmth and light I had never felt before.

“Ah, Mah-sha,” he said, renaming me and claiming me as his right there on that bar stool.

How to Retire With Joy: For Carolyn and all of my friends who have walked away from the classrooms they loved.

First, have no plan.I know how hard that will be for you, given that for…

In a wonderful talk posted on Ted.com, the Nigerian novelist Chimamanda Ngozi Adichie discusses the…

Finding a Writing Practice In 17 Syllables

Soon after I retired from teaching high school for thirty-five years,  after hearing the  voice inside…