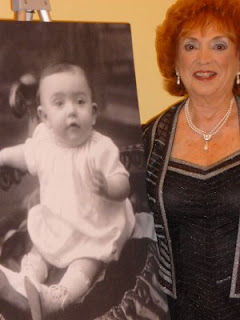 We celebrated my mother’s 80th birthday yesterday by dancing. And right there in the middle of the floor for the entire 4 hours was my mother Shirley, in her 80 year old glory, shaking her booty, and shimmying up to her 86 year old fourth and fabulous husband, Irving. The party was held at Irving’s country club and if anyone had told me 40 years ago that my mother would be spending her platinum years dancing her life away with a genuine prince charming, I would not have believed it.

My mother, like most of the woman of her generation (or maybe all of us – though I don’t quite have this perspective on my own life just yet) has forged a life for herself that is deeply rooted in the social and cultural upheavals of her age. Born months before the stock market crash, growing up poor, the only child of a single mother during the Depression, marrying a WW II veteran recently returned from Europe, giving birth to three children in quick succession in the fifties, becoming a Donna Reed housewife, only to be abandoned by her husband in the beginning of the sixties, Shirley went through more metamorphoses before she was forty than most people go through in a life time.

A single mother (like her own)during the early 60s, long before it was a life style choice of the terminally hip, Shirley was fueled by pure adrenaline and guided only by her survival instinct. After a sixteen month interval in which she suffered what some might have called a nervous breakdown after my father left, she lifted herself up, found a full time job with the school district and at age 39, entered college and began the education she had forsaken (at the urging of her mother who warned her about becoming too smart to get a man.) She then proceeded to work the system to ensure that all three of her children were able to receive college educations; at one point during the 1970s, all four of us were in college paid for by every possible grant and loan available at the time.

It was also during the 70s that my mother married her second husband. A manic depressive (of course she met him during a manic phase and was completely swept off her feet by his charisma, charm and sexual energy) he took my mother on a wild ride to the heights of pleasure during their whirlwind courtship, sliding soon after their wedding into the depths of despair. I can still see my mother at this time of her life writing her master’s thesis at the kitchen table while he railed at her and wailed at the universe (he refused to take his lithium and shot himself in the head years later). She ignored him until her thesis was completed, then allowed herself the luxury of falling part.

There’s more of course. The 80s when she became an independent career woman, using her newly earned Masters degree to work her way up the ladder at a social work agency, while dating the man who was to become her third husband, love of her life and soul mate.

In the 90s, she lived the American Dream of retirement, traveling the world with her husband, wintering in Marco Island and going out dancing three, four nights a week. She used to say that they were “joined at the hip” so how tragic and ironic that he died from complications of a hip fracture he suffered while they were in Florida in 2005.

After he died, she took to her bed once again, this time keeping company with her late husband’s ghost. It was her gardener who saved her, introducing her to Irving, the nice widower around the corner, the man who was to become her fourth husband, her new dance partner and the host of the wonderful celebration we had for her 80th birthday yesterday.

Last summer, at the Irving’s insistence, my mother had knee replacement surgery. For years, she had been having difficulty walking and by last summer the pain had pretty much sidelined her from life. Irving, who at 85 is still vital and who had nursed his wife of nearly 50 years through years of debilitating illness had been looking forward to enjoying his life with his new wife Shirley. He insisted that she have the surgery.

My mother is not a good patient. She has a very low tolerance for pain and knee replacement is one of the more brutal and painful elective surgeries in modern medicine. Throughout the ordeal and it was quite an ordeal, replete with all manner of emotional traumas, Irving remained calm and continued to encourage his wife to do what she needed to do as she spent long months in painful rehabilitation.

It’s funny, looking back over my mother’s life, seeking out the patterns, that it’s the entr’actes that catch my attention right now- the times of transition: the sixteen months after my father left her when she had a nervous breakdown; the ravages caused by her tumultuous second marriage; the months between being a widow and a new bride; her recovery and rehabilitation from brutal surgery.

Maybe it’s because I am in the midst of my own l’entr’acte. At age 56, I am still young and vibrant and thankfully strong and healthy. Finished raising my children, retired from my teaching career, struggling to figure out what comes next, I find myself looking back over my mother’s life searching for signposts or secret messages.

Yesterday, in her tribute to our mother, my sister Janet spoke of alchemy – how my mother has always been able to turn base metal into gold – crisis and struggle into opportunity.

I still need more time to think about what my mother’s alchemical process looks like – to understand her secret formula for making a life..

The only thing that I am sure of right now is that it has something to do with dancing. 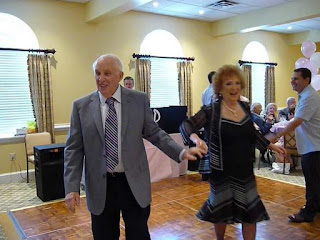 Student Voices in Dialogue With Teachers – Part I