I have recently returned from a very enlightening and magical trip to Italy. It is the first trip of my retirement and the first vacation my husband and I have taken out of the country. I had only been to Europe once, prior to this trip — with the American Gathering of Holocaust Survivors Fellowship for Educators about Jewish Resistance during the Holocaust. That trip was life changing and deserves its own post — something I will write at a later time. I bring it up here to say that even though I had been to Europe once before, my time in Poland was spent visiting concentration camps and learning about the death of a 1000 year old civilization.

Not a happy time.

This time, our trip to Italy was supposed to be purely recreational — sight seeing, eating amazing food and drinking lots and lots of wine.

We did that and more the past few weeks, traveling through all the beautiful towns and cities of Northern Italy.

I first noticed the students in Florence. They were sitting in the square outside the Duomo and they seemed to be having class. I asked our local tour guide what was going on and she replied that the students were protesting education reforms proposed by the government. She indicated that the students across the country were staging nation-wide sit-ins and that she felt it was just an excise for them to cut school. 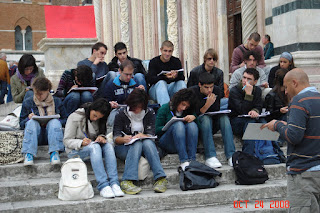 I was intrigued. And despite what this woman had said, it didn’t look like the students were cutting school to me. It looked as if they were seriously engaged in teaching each other something. Their teachers were with them, but for the most part, they remained quietly supportive. Later, I asked our tour director, Mauro Tinelli if he would explain to me what was going on. He explained that right-wing government, in an effort to cut the budget and save money was proposing changes to the educational system that included raising class size in the secondary schools ( to 26) and eliminating separate teachers for different subjects in the primary schools, the implementation of behavior grades and the wearing of uniforms to curb bullying. The proposal also included severe cuts in Euros to the University system which would amount in fewer number of courses and degree programs offered to Italian students. My first reaction to this was — hmmmmm… sounds an awful lot like American public schools — more than 26 in a class and one teacher in the primary grades… Another aspect of this proposal includes the establishment of separate classes to foreign immigrants — so called bridge classes to introduce immigrant children to Italian language, values, history and customs…

I spent the rest of the trip trying to learn as much as I could about the student protests and the proposed changes to the educational system in Italy. In every city and small town we visited from Sienna to Venice ( where there was a huge rally in St. Mark’s Square) we saw students seemingly self organized, gathering together to state demonstrations and teach-ins. I was frustrated by my inability to understand the language and really engage with the people in the squares. I bought an Italian newspaper La Spalletta in Volterra and asked Mauro to translate the articles about the school for me. ( Mauro, ever the joker told me that the headline “Studenti in Rivolta” meant “The students are revolting!” )

While his actual translation pretty much confirmed what he had told me earlier, I still had questions. What was the political bent of the publication I was reading? What role did social class and race play in this issue? Was it universally supported by the students? What did the public think. Another local tour guide — this one from Sienna — told me that everyone agreed that the schools in Italy were “a mess” and that something needed to be done. They just didn’t all agree on what needed to be done. I couldn’t get an understanding from anyone about what was “a mess” about the schools.

I was also learning a little bit about the history of Italy and the economic differences between the northern and southern provinces. An incident that occurred in Venice near the end of our trip speaks to that.

One the final day of our trip, we visited the Jewish Ghetto in Venice. It was the first ghetto — in fact the very term ghetto originated here. We were taking tour of the remnants of five synagogues that once functioned in Venice. As we approached the steps of one of the synagogues, a group of about 10 high school aged boys were sitting outside smoking cigarettes and joking around with each other. It was obvious to me at least that they weren’t Jewish ( I knrw this even before learning that there were only 20 Jews currently living in the ghetto and only 500 Jews living in all of Venice — at its height, this community boasted 5000 people.) I felt mildly threatened by these young men and felt the tension in the air when our local tour guide, a Jewish man with a very cynical and resigned attitude, engaged them in conversation. They spoke Italian of course and I had a hard time understanding what they were saying.

Later the guide told us that the boys were part of a high school class who was touring the ghetto as a class outing. The ghetto gets tens of thousands of visitors a year. These particular young men refused to enter the synagogue, they said, because it was against their religion to cover their heads in a house of worship. Our tour director taunted them by saying how the pope covers his head. When we entered the synagogue, we saw the classmates of these boys — mostly female – being lead through the building my a tour guide and their teacher.

After the tour, a member of our group asked the tour guide if the students were members of the Northern League, a right wing neo Nazi political party that favors the the establishment of an independent nation, Pandania, the richer half of the Italian peninsula. While the tour guide could not tell us with certainty, the political affiliation of these young men, it was clear to me that they seemed to have a disdain for Jews. It also made me wonder how they felt about the young men from Africa who lined the streets of places like Pisa and Florence, selling tourists fake designer products and other cheap souvenirs.

I have not been able to learn enough about the politics, economy or education system in Italy to have any opinions. But, my experience in taking an inquiry stance and questioning the assumptions on which people form opinions about American politics and education, I am in the process of at least trying to raise the appropriate questions.

Why do so many people say Italian schools are a “mess?” Why are they in such need of reform?
Is it solely about money or are there other factors? Are there some people who benefit more by the current system than others and is that why they are protesting so much? How does this education battle play out in the northern and southern ( less rich) parts of Italy? Are the schools currently better in the north? What role does racism and xenophobia play in the current debate? Are the southern Italians more likely to be dark complected — isn’t “swarthy” the word I have heard used to describe Sicilians?

I returned to the US on Tuesday, October 26. Later I learned that the proposal the students were protesting was passed by the Italian parliament on Wednesday. Since then,
I have continued trying to understand what is happening in the schools but I have concluded for now that I don’t have enough background information to make any commentary.

This situation has also reminded me how complex educational issues are and how they are always tied to larger social, economic and political happenings. One report talked about how this reform will be a boon to private schools in Italy. Below I share several links to coverage I have found and ask others who read this who may know more about the situation to post their responses and send links.
http://www.youtube.com/watch?v=273HX4fspjc

Finding a Writing Practice In 17 Syllables

Soon after I retired from teaching high school for thirty-five years,  after hearing the  voice inside…

I don’t know what I expected, really, when I got the idea to take him…